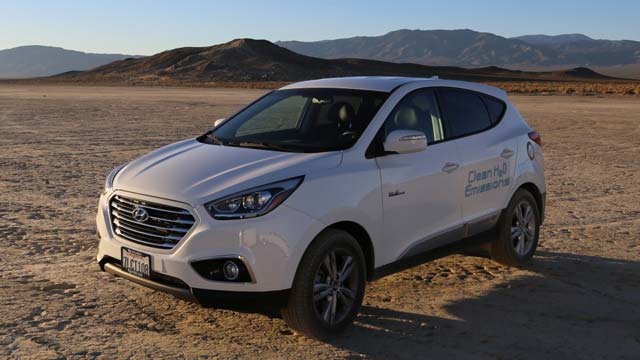 Hyundai and the U.S. Department of Energy (DOE) are extending their fuel cell vehicle confirmation program, originally from 2013 through 2015, to its second phase, from 2016 through 2017.

The program involves Hyundai providing a number of Tucson Fuel Cell CUVs for daily use and confirmation by the DOE using existing hydrogen infrastructure. This phase of the program will make significant use of a newly-opened hydrogen refueling station in the Washington D.C. region.

Phase one of the Hyundai/DOE program focused exclusively in the Southern California region, where the earliest hydrogen infrastructure existed. Phase two further expands the program’s reach to Northern California, Washington D.C., Michigan and Denver. Phase two starts in July 2016 in conjunction with the opening of the newest D.C.-based hydrogen station. Tucson fuel cell vehicles will use this newest DOE-developed hydrogen station extensively.

The Hyundai/DOE partnership effectively continues preparation for the rollout of fuel cell vehicles nationwide in the near future. Some key advantages of hydrogen fuel cells over battery-powered electrified vehicles is their quick refueling capability, longer range, more flexible vehicle size scalability and maintenance of range performance in colder climates.

Hyundai has delivered nearly 100 Tucson Fuel Cell crossovers since its introduction as the first mass-produced fuel cell in the U.S. market in June 2014.

Hyundai Tucson Fuel Cell drivers have accumulated more than 1,000,000 miles on the roads and highways of Southern California while emitting only clean water and replacing approximately 385 tons of CO2 emissions that would have been emitted from vehicles of similar size.

The Hyundai Tucson Fuel Cell CUV has an estimated driving range of 265 miles between fill-ups, similar to many gasoline vehicles. Further, both fuel cell driving range and vehicle performance are minimally affected by either extreme hot or cold ambient temperatures, giving owners an extra measure of peace of mind as they go about their day. Even more important for consumers transitioning from gasoline vehicles, the Tucson Fuel Cell can be refilled with hydrogen in less than five minutes, about the same time as a typical gasoline vehicle.


Tags:  Hyundai And US DOE

It's too early in the investigation of Joshua Brown's tragic death after his Tesla Model S collided with a semi-truck in Williston,...
Copyright 2017 CarFilia
Back to top