Just last week we told you a Ford GT set a new lap record for production cars around Virginia International Raceway’s Grand Course West layout. Now, that record has been broken by the new Corvette ZR1.

Chevrolet announced today it was able to lap a 2019 ZR1 equipped with the optional eight-speed auto and ZTK performance package around VIR in 2:37.25. That’s 1.37 seconds quicker than the Ford GT’s time, making the ZR1 the fastest production vehicle to ever lap the course.

Aside from a harness bar and five-point harnesses, Chevy says the ZR1 used was totally stock, set up with alignment and aero settings specified in the owner’s manual. The $2,995 ZTK package gives the car a whole bunch of aggressive features, including an adjustable carbon fiber wing, a front splitter, Michelin Pilot Sport Cup 2 tires, and track-ready magnetic ride control. The lap was set during validation testing earlier in January leading up to the car’s production.

The driver, vehicle dynamics engineer Jim Mero, is known for his mastery of the Nurburgring behind the wheel of Chevy products. If anyone was going to break the record, it would be him. Chevy was keen to note that Mero is an engineer, not a pro-driver. That was definitely a dig at Ford, which set the record using Ford GT race driver Billy Johnson.

Also, like Ford, Chevy claims it wasn’t going for a record, rather the time was set during validation testing for the ZR1. What’s next? Dodge takes a Viper ACR, sets a new record, and then claims they didn’t intend to set the record because a child was driving it, it was stuck in third gear the whole time, and the kid parked it near where the oak tree was for a brief picnic. It could happen. Probably? Maybe?

Perhaps the most impressive part of this ordeal isn’t the ZR1’s lap, but rather a lap set by the Chevy team earlier in a manual-transmission Corvette Z06. They were able to lap the car around VIR’s Grand Course West in 2:39.77—a little more than a second slower than the Ford GT. Not bad for being a quarter of the price. 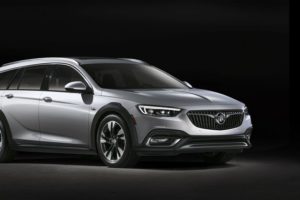 As a newborn member of an endangered species, we should probably pop open the Dom to fete the arrival of the 2018 Buick Regal...
Copyright 2017 CarFilia
Back to top