Remember how distinctive the first-generation Toyota RAV4 was when it hit the scene back in the mid-1990s? A unibody trucklet with a bulbous but rugged exterior, it resonated with outdoorsy and active types, and it foreshadowed the compact-crossover boom.

Although Toyota’s official line is that the FT-AC concept is just that, it’s our belief that the Prospect Green off-roader with its Fortress Gray trim not only portends some styling cues that will appear on the next-generation RAV4, but it also could signal a new model to be shoehorned in the lineup between the RAV4 and the Highlander.

LED marker lamps at the front corners and rear of the roof rack can be used for ambient light—think post-activity chill sessions—while the fronts provide additional illumination for driving off-road. Or they could be configured to act as flash units for the infrared cameras that are embedded in the door-mounted rearview mirrors. Said cameras can capture vehicle trail runs and can be removed from the vehicle to record all manner of activity, extreme or otherwise. An integrated Wi-Fi hotspot allows the ability to live-stream the feed or upload the content. The fog lights also are removable, allowing them to be repurposed as flashlights.

Bicycle enthusiasts will appreciate the retractable integrated bike rack, which deploys from the rear bumper/skid plate without the need to haul around a bulky external unit; the downside is that it only has room for one bike. The FT-AC is also said to have “geolocation capabilities” for stress-free travel back to base camp—we assume this means an integrated GPS unit.

Toyota envisions the FT-AC as a gasoline-powered SUV (although a hybrid also is suggested) with all-wheel drive, including four-wheel lock functionality as well as torque vectoring. Selectable terrain-response settings would maximize capability.

Toyota isn’t saying much more at his point. While we’d like to see the FT-AC reach production as a stand-alone model, at least some of its key design themes deserve to find their way into the next-generation RAV4. That model has been flying under the radar for far too long. 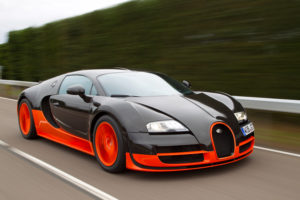 Many automotive aficionados dream of becoming the proud owner of one of the fastest cars in existence. With top speeds exceeding...
Copyright 2017 CarFilia
Back to top