Angry at Dodge because it still hasn’t dropped that 707-horsepower Hellcat engine into its Durango SUV? Do you want a supercharged family hauler, but need one more row of seats than a Grand Cherokee Trackhawk? Well, worry not, because there’s a shop out in Arizona that’ll do the swap for you.

Plum Floored Creations, a Mopar shop just outside of Phoenix, will build you your very own Hellcat-powered Durango for about $40,000 plus the donor Durango R/T model. Show up with a 2014 or later model, and you get the full Hellcat engine, unchanged from how it appears in a Challenger or Charger. If you bring in a 2010-2013 pre-facelift model, you get the Hellcat’s 6.2-liter V8, but instead of using the stock 2.3-liter supercharger, Plum Floored Creations installs a larger 2.9-liter Whipple model, in order to make it to 707 crank horsepower while still using the older Durango’s ECU.

Every swap by Plum Floored Creations includes a new heavy-duty six-speed ATS Stage Three transmission, Brembo brakes with six-piston calipers up front, four-pots in the rear, and a set of massive 22-inch aluminum wheels. The axles and differentials remain stock, but the the front and rear driveshafts get replaced with beefier units.

Of course, if you want everyone around you to know this isn’t just another factory SUV, Plum Floored Creations also offers a bunch of exterior Hellcat decals. 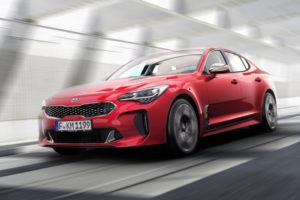 The Borgward THE LAST TIME ANYONE GOT EXCITED ABOUT A 9.5-minute lap of the Nürburgring Nordschleife, Hermann Lang was popping...
Copyright 2017 CarFilia
Back to top