BMW i will offer a new model range of its compact electric car, the BMW i3 and from the 2017 model year will be offering a new version with more than 50% increased battery capacity.

The 2017 BMW i3 (94 Ah) has a capacity of 33 kilowatt hours (kWh) thanks to the higher energy density of the lithium ion cells. The BMW i team worked to ensure that the battery dimensions remain unchanged while still offering a significant range increase.

Even in everyday conditions, the new Battery Electric BMW i3, in varying weather conditions and with the air conditioning or heating turned on, a range of up to 114 miles combined (hwy/city) is possible as shown by independent BMW testing cycles. The driving performance figures of the 170 hp AC synchronous electric motor remain virtually unchanged.

The motor propels the BMW i3 from 0 to 60 mph in just over 7 seconds. This makes the BMW i3 both the sportiest and most efficient electric vehicle in its segment with an expected EPA electricity consumption of 27 kWh/100mi. In addition to the Battery Electric BMW i3, the Range Extender model will also feature the 94 Ah battery. When equipped with the Range Extender, if the driver requires additional range, the 2-cylinder gasoline engine is switched on once the battery is depleted to 6.5% state of charge and keeps the charge level of the battery constant while driving and provides an additional range thanks to a 25% larger fuel tank (2.4 gallons).

With the introduction of the BMW i3 (94 Ah), BMW i now also offers a new BMW Home Charger Connect, a residential charging station designed for comfortable and fast home charging featuring additional connected functions. Pricing for the 2017 BMW i3 (94 Ah) will be released closer to market launch.

The BMW i3 (94 Ah) sets a new benchmark in its segment with 94 ampere hours (Ah) cell capacity, 33 kWh total battery energy, and an electric range of approximately 114 miles combined (hwy/city) on one full battery charge. Consuming only 27 kWh/100mi the BMW i3 is the most efficient car in its segment with the lowest electricity consumption costs of approximately 2.81 USD/100mi.

The lithium ion cells used, set themselves apart in the competitive field by achieving a special balance between high energy density, cycle stability and safety in the case of an accident. The high-voltage battery also has an advanced thermal management system that keeps the battery operating in the optimal temperature range, which further enhances performance. For example, the coolant of the air conditioning system is responsible for cooling the high-voltage battery very effectively, while a heating system can also be used to warm the battery to ensure the optimal operating temperature before starting off. Customers receive an 8-year/100,000-mile High-voltage Battery Warranty.

The BMW i3 is by far the lightest car in its segment. Despite the slight weight increase, at 2,961 lbs (BEV), and 3,234 lbs (REX), the BMW i3 (94 Ah) is characterized by driving performance, which is subjectively as agile as the 60 Ah model variant. The BMW i3 (94 Ah) is also powered by the same 3 phase AC synchronous electric motor developed in-house by the BMW Group. The motor generates an output of 170 hp and delivers 184 lb-ft of torque which is available as soon as the electric motor begins to turn.

The BMW i3 (94 Ah) accelerates from 0 to 60 mph in just over 7 seconds. The impressive electric motor, small turning circle of 32.3 feet, – a major benefit to driving in the city – BMW’s near-perfect 50-50 weight distribution, precise electric power steering and the stable suspension set-up help to make the i3 as satisfying to drive as every other BMW.

The electric consumption of the BMW i3 (94 Ah) has also been reduced by a large number of detail improvements including revised electric motor management as well as advanced low-resistance tires with optimized compound.

The 7.4 kW charging electronics of the BMW i3 (94 Ah) can charge the 33 kWh battery in approximately 4.5 hours using a Level 2 charger, which is slightly more than the approximately 3.5 hours required to charge the battery on a BMW i3 (60 Ah). Standard equipment of the BMW i3 includes the occasional use cable for connecting it to a domestic power socket. Core elements such as range, hallmark BMW agility thanks to low weight and overnight battery charging remain in place.

The BMW i3 also sets standards when it comes to connecting driver and car. The BMW i Remote App provides useful vehicle-related mobility planning data available on the customer’s smartphone. Apart from pedestrian navigation; navigating your way to your destination from the parking space and back, BMW ConnectedDrive offers a so-called intermodal routing system and for the first time in combination with the Navigation System Professional. This also incorporates public transport connections such as subway stops if this means you can reach your destination quicker. From the actual trip in the BMW i3, looking for a parking space, changing onto a metro and or a walking route, the BMW i ConnectedDrive services take the customer to his destination efficiently.

How Cars Are Changing for Varying Levels of Interest, Skill, and Income 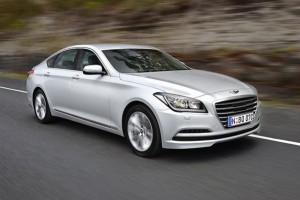 The Hyundai Genesis and Sonata were honored with The Car Book’s 2016 “BEST BET” distinction. For 36 years, The Car Book...
Copyright 2017 CarFilia
Back to top