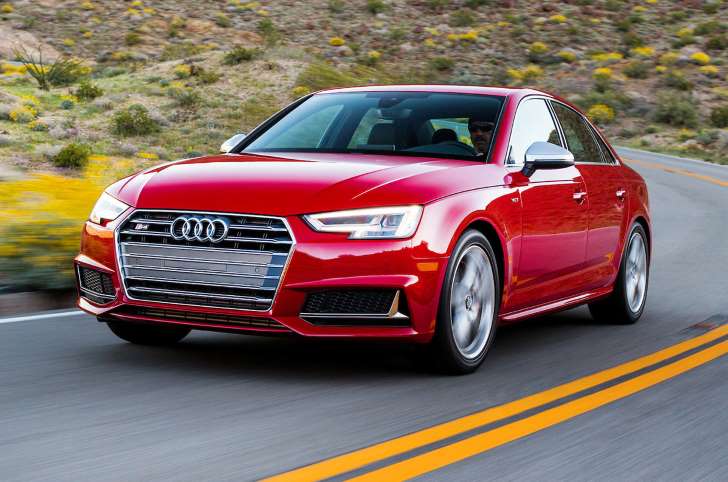 When we first saw Audi’s sexy S5 coupe (on architecture internally known as B8 in 2007 as a 2008 model), we fell in love with the car’s Coke-bottle profile, near-perfect proportions, and the company’s brilliant 4.2-liter V-8 that made 353 baritoned horsepower. Later updated with a 333-hp supercharged V-6, we felt the car had lost some of its masculine mystique. However, we’re already on record as fans of Audi’s current A4 2.0T quattro, which recently took second place in our Big Test of compact luxury sport sedans.

Because there are many similarities, hence the double-car First Drive, it’s tempting to assume Audi’s five-passenger S4 sedan and four-passenger S5 coupe are merely four- and two-door versions of the same car. Besides the door disparity, a quick glance at specs shows a 2.4-inch variance in wheelbase, 2.1 inches in length (S4 is longer), and small differencesin width and height (the S5 is slightly wider and lower by about an inch). It’s worth mentioning that the S5 is also offered in Convertible and four-door Sportback (hatchback) variants.

The S4 and S5 test cars we drove were identically trimmed Prestige variants with the same options. They included Audi MMI Navigation Plus with touch, a color head-up display, a top-view camera system, and Audi’s benchmark reconfigurable virtual cockpit instrument panel, which supports Google Earth mapping or a constellation of displays/gauges.

Last year’s S4 and S5 quattros were powered by a 3.0-liter supercharged V-6, and gear changes were handled by either a six-speed manual or a seven-speed twin-clutch automatic transmission. All that’s changed for 2018. The new driveline consists of a re-engineered 3.0-liter V-6 (now turbocharged) and an eight-speed automatic. There weren’t enough takers for a manual transmission last time, so blame your “I don’t want to be bothered with a third pedal” neighbors for that. Rest assured, however, the cars’ new eight-speed automatic shifts with the same quickness and seamlessness as the previous seven-speed twin-clutcher.

Unless variable-ratio steering is linked to the amount of dial on the steering wheel itself (more turn, quicker ratio), we’re generally opposed to systems that only take their orders from vehicle speed. They tend to provide incongruous responses and behave unpredictably. Yet both of our test cars featured Audi’s optional dynamic steering systems ($1,150), and although neither gave us a sense through our fingers of how much work the front tires were doing to turn the car, neither one was unpredictable at speed. (Parking speeds produced the single most unnatural feeling.) We wish there were at least one test car available without variable ratio steering so we could have compared them. Yet at speeds that would (and did, for some) get the notice of the local constabulary, both cars felt planted yet eager without feeling heavy or darty.

The standard seats, optionally wrapped in Nappa leather, were coddling and appropriately firm. The side bolsters were effective without being intrusive. From inside either of the cars, the exhaust note was sporty and reedy but also somewhat muted and shy of what we’d call snarly. We’ll assume raucous behavior will be reserved for the RS versions—the 2018 Audi RS5 made its debut recently in Geneva with a 2.9-liter twin-turbo V-6, but we haven’t heard it yet.

With a nearly identical relationship in price, performance, and overall execution, at $55,575, the 2018 Audi S5 Premium Plus quattro again would find itself in the midst of a battle with a Mercedes-AMG C43 4Matic Coupe, to a lesser degree with a BMW 440i xDrive, and a Cadillac ATS-4 Coupe.

Audi is certainly cranking out some of the best-looking, best-equipped, and most-engaging hardware these days, and these two enthusiast-oriented (just shy of RS hardcore) examples prove Audi knows how to not only create consumer friendly sedans (A4, A5, and A6) and full-on sports cars (TT RS, RS 3, and R8 V10 Plus) but also how to also fill in the middle bits with these attractively priced, powered, and poised newcomers. 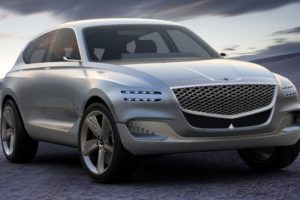 Genesis shows the face of its expansion with the GV80 concept that provides our first look at what a SUV from the new brand...
Copyright 2017 CarFilia
Back to top