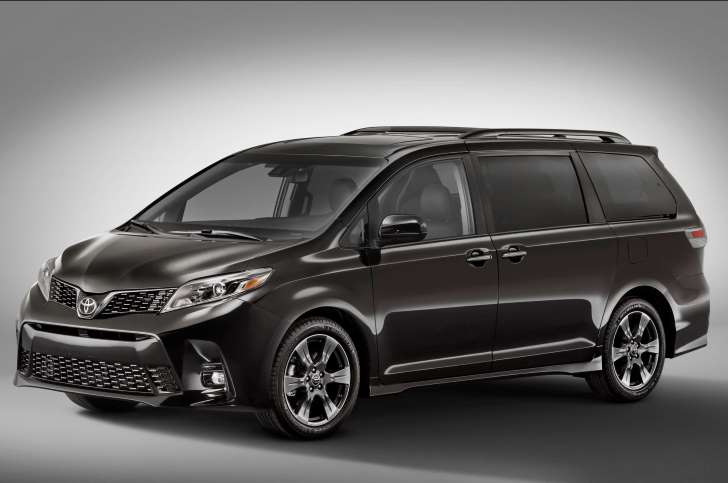 One year after introducing a more powerful engine to the Sienna, Toyota is making further updates to the best-selling minivan in the U.S. The 2018 Toyota Sienna heads to the New York auto show next month with new technologies and an updated exterior design.

The Sienna’s new face is reminiscent of other Toyota products. With a larger, lower grille, the Sienna looks a bit more athletic than before. Toyota also added larger fog lights and side lower rockers on every model. Three new colors are available: Toasted Walnut Pearl, Alumina Jade Metallic, and Parisian Night Pearl.

Other upgrades can be found inside the cabin, such as a new Toyota Entune 3.0 unit for all models. The infotainment system comes with standard Connected Navigation Scout GPS link with Moving Maps, a turn-by-turn nav app. LE, SE, and XLE grades receiv eEntune Audio Plus, which includes Safety Connect emergency assistance and Wi-Fi Connect with 4G LTE. The Entune 3.0 Premium JBL Audio system, standard on the top-trim Limited model and available on the SE and XLE, features a premium sound system as well as Dynamic Navigation, which provides wireless updates over-the-air for improved map accuracy.

Toyota has added Android streaming capability to the rear seat entertainment system. There are five USB ports throughout the cabin allowing passengers in all three rows to hook up their devices. To reduce noise, vibration, and harshness, the automaker introduced a laminated front windshield to the mid-level SE model and new acoustic front row side glass on the top Limited trim.

Given that Honda revealed an all-new Odyssey for 2018, and Chrysler continues to shake up the minivan segment with its Pacifica, it’s interesting that Toyota has chosen to refresh its current-gen Sienna, which has been around for seven model years already. Will it be competitive with this new crop of people-movers? We’ll find out when the 2018 Toyota Sienna goes on sale in the U.S. this fall.

We’re used to the idea of our car breaking down and wearing out. It’s a part of life: or at least it has been in the age of fossil...
Copyright 2017 CarFilia
Back to top