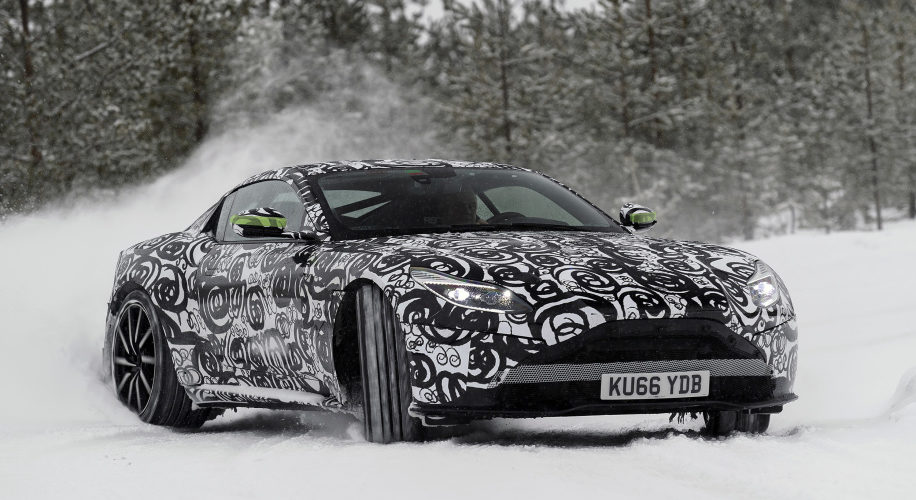 “My job is to make them drive like they look,” Matt Becker, Aston Martin’s vehicle attributes engineer, tells me. The engine is idling, and we’re harnessed inside of the 2019 Vantage test mule’s racing bucket seats, somewhere on a frozen lake near the Arctic Circle in Sweden. Since the Vantage is Aston’s best seller, and it’s representative of the things the brand stands for, it’s safe to say this chilly prototype is the most important Aston Martin on the planet right now.

How and when the power comes on depends on driving conditions and mode, of which the 2019 Vantage has three: Sport, Sport Plus and Track. Absent is the DB11’s GT mode, which fits perfectly on the grand tourer but not on a pure sports car such as the Vantage.

A massive, oxygen-gulping grille dominates the frontend. The car is about the same width as the DB11, but in person, it seems twice as wide as more pedestrian sports cars. Fender vents serve both functional and aesthetic purposes. The lip of the trunk swoops up, a naturally integrated spoiler that will help deliver downforce.

The third element to helping front-end and overall dynamics is an exceptional amount of aerodynamic work. “If you push DB11, you get a little bit of lift at the front, downforce at the rear,” Becker explains. Vantage, on the other hand, profits from downforce both front and rear.

After at least a lap and a half in complete opposite-lock, it’s now time for a different display of the Vantage’s traction and technical prowess on a split-mu exercise. Essentially, we climb a hill with the left side of the car driving up a strip of concrete, the right side on the ice and snow. Absurdly, with the systems on, we climb right up with relative ease, despite half of the car’s wheels spinning up a frozen, slick surface. At the top of the hill we bank left and drive down, to repeat the same exercise, this time with the systems turned off.

You can see the heat waves ripple above the asphalt. That’s not the only clue that the scene is markedly different from the last time I saw the Vantage. Several months have elapsed, and instead of snow we’re surrounded by sand and cacti.

We dial back the speed, and the blurred cactus we’re whizzing by returns to clarity. If the Vantage fails here, it would be disastrous. But it is distinct from Aston’s grand tourers, fulfilling the nameplate’s promise of more speed and engagement, at least from the passenger seat. We’ll be driving it ourselves soon enough, to test our assumptions further, but it’s a promising first dance.

SF Motors Unveils All-Electric SUV, Available For Pre-Order By The End Of 2018 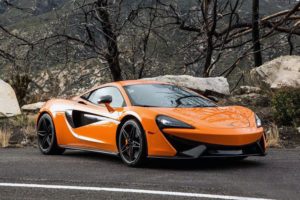 McLaren 570S Spider buyers can now take advantage of a new options package that brings together a range of practical and visual...
Copyright 2017 CarFilia
Back to top