The Drive’s big-man-on-campus Mike Guy isn’t a big fan of puns, so odds are good he won’t like the name of Henrik Fisker’s newly-revealed electric car, the EMotion. However, we don’t all share his distaste for humorous wordplay—and to be honest, we kind of admire a company with the chutzpah to give his expensive, high-tech luxury sedan designed to beat the likes of Tesla at its own game a punny moniker.

The images released today build on the sultry profile view isker released roughly a week and a half ago, which revealed the EMotion would come equipped a quartet of butterfly doors. The new pics, which appear to depict a CGI rendering of the car booking it across the automaker-beloved El Mirage dry lake bed, show off a front end with a clear familial resemblance to the Henrik Fisker-designed VLF Force 1 and a front three-quarter view that…well, let’s just say it brings to mind the two-box Cadillac Seville of the early 1980s. The first picture of the EMotion seemed to depict a rather shapely tail hovering over and behind that rear axle; let’s hope the company simply chose a poor angle to depict the car from.

Fisker also dropped a few new details about the EMotion in the press release accompanying the images. The car will have a claimed top speed of 161 miles per hour, but don’t expect the batteries to last for their claimed maximum range of 400 miles if you’re punting two tons of carbon-fiber, composites, and aluminum along at that sort of speed. Fisker says the car will come with all the hardware needed for self-driving operations, much like the latest Teslas. And in what sounds like a clear shot at Tesla over the recent complaints the Model S doesn’t have the rear seat room to compete with the likes of the Mercedes-Benz S-Class and the BMW 7 Series, the release even states that the EMotion will have “more rear legroom than many full-size luxury sedans.”

Fisker says the EMotion—okay, we’ll admit, the odd capitalization is starting to get on our nerves a little—will be shown off in the flesh sometime in the middle of 2017. Here’s hoping the company shows off a couple more (and more flattering) angles of the car before then. 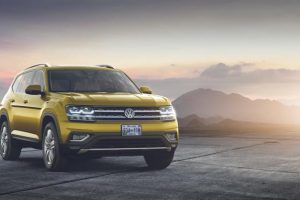 The 2018 Volkswagen Atlas isn't the Microbus some of us have been hoping for, but the crossover is a crucially important...
Copyright 2017 CarFilia
Back to top