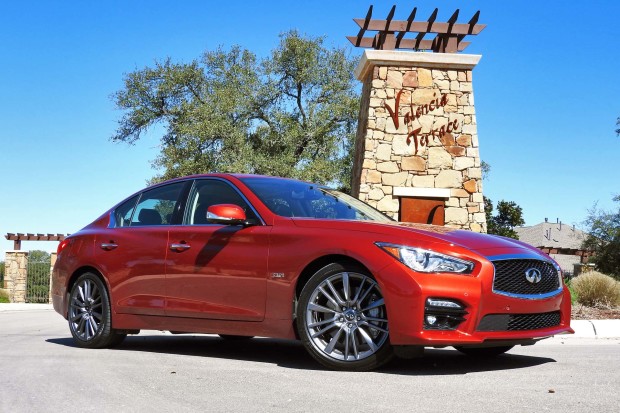 With a name like ” Q50 Red Sport 400,” you’d think that the hottest version of Infiniti’s best-selling sedan would have a clear mission. Close your eyes, and just focus on the name. Do you see a no-compromises sport sedan? Or a luxury sedan with a slight sporty streak? If you’re like me, you probably imagine the former, but in reality the car is closer to the latter.

For 2016, Infiniti replaces the aging naturally aspirated, 3.7-liter VQ-series V-6 with a new twin-turbo, 3.0-liter VR-series V-6 available in two states of tune. The base 3.0t makes 300 hp and 295 lb-ft of torque, but the Red Sport 400, as its name suggests, makes 400 hp and 350 lb-ft. In addition to that extra potency, the Red Sport gets an electronically controlled Digital Dynamic suspension, larger brakes, and a set of staggered 19-by-8.5-inch front and 19-by-9.5-inch rear alloy wheels for rear-wheel-drive models (AWD variants get 19-by-9s all around). Our car came with the optional Bridgestone Potenza RE050A non-run-flat summer tires in a staggered fitment of 245/40R19 front and 265/35R19 rear.

Although you won’t get the impression of sportiness by sitting in it, it’ll hit you as soon as you step on the gas. In typical Infiniti fashion, throttle tip-in is aggressive. Apply anything more than normal pressure to the right pedal, and the engine is soon wailing at stratospherically high rpms. In Sport mode, the throttle is even touchier, with a very thin threshold between “I’m a normal driver just going about my business” and “I’m a speed-obsessed maniac.

If the Q50 Red Sport 400 has one thing going for it, it’s speed. The twin-turbo V-6 accelerates effortlessly on the highway, and with minimal lag from the turbos, you won’t miss the old naturally aspirated 3.7-liter. From a standstill, the Red Sport booked it to 60 mph in 4.5 seconds and completed the quarter mile in 13 seconds flat at 109.2 mph. That’s 0.7 second quicker than our old long-term 2014 Q50S in both acceleration tests.

That one-wheel peel is due to the car having an open differential, a part you don’t normally expect on a sport sedan. Although a viscous limited-slip differential was offered on the previous G37, that option curiously isn’t available on the Q50. Walton posits that the Red Sport could’ve shaved some time off its figure-eight result if the car wasn’t constantly spinning the inside tire. If you don’t want to mess with the DAS system, there’s good news. You don’t have to. DAS is a $1,000 option, though to get it you need to specify several other packages. Conventional hydraulic power steering comes standard.

This brings us back to the question of what the Q50 Red Sport is intended to be. It’s fast but not particularly rewarding to drive. It’s reasonably luxurious, but the ride is uncharacteristically stiff for a luxury car in either of the adjustable suspension’s two settings. The Q50 is a better car with the new twin-turbo engine, but much like the Infiniti brand itself, it still lacks a clear objective. When you’re a challenger brand and your competition includes jacks-of-all-trades such as the 3 Series, C-Class, and A4, being a master of one would help you stand out. 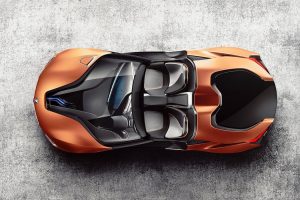 The BMW i Vision Future Interaction has been presented with the inaugural special prize for connectivity at the Auto Test...
Copyright 2017 CarFilia
Back to top