Move over, F-Type, Jaguar has a new performance flagship. The Special Vehicle Operations division of Jaguar Land Rover applied its expertise to the XE sports sedan to create an absolute monster of a car. Named the XE SV Project 8, it features a 5.0-liter supercharged V8 pumping out 592 horsepower and 516 pound-feet of torque. That power goes through an eight-speed automatic and an all-wheel-drive system with an electronically controlled torque-vectoring rear differential. In practice, this will rocket the super sedan to 60 mph in a claimed 3.3 seconds on the way to a 200 mph top speed. 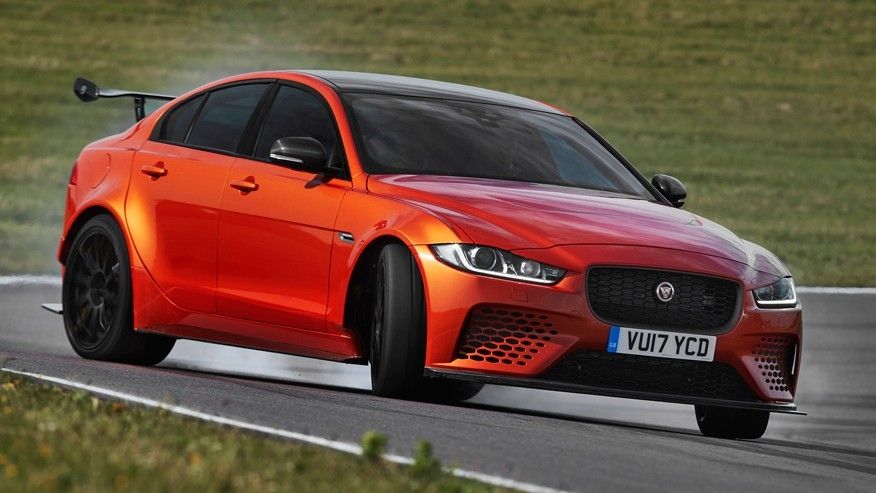 The XE SV Project 8 is not only about raw power and speed, though. Lightweight carbon fiber bumpers, front fenders, and hood have been fitted. The fenders are significantly wider, too, which cover 265-mm wide tires up front, and Hellcat Widebody-rivaling 305-mm wide tires in the back. The added grip is supplemented by stiffer springs and retuned anti-roll bars and shocks. The front splitter and rear wing are adjustable, as is the ride height. Carbon ceramic brakes are also included with six-piston front calipers and single-piston rear calipers. All of these pieces should come together to make the XE SV Project 8 just as impressive in the corners as in a straight line.

The interior has undergone an overhaul, too. The standard model has seating for four, featuring front buckets with magnesium frames, and more sculpted rear seats. Carbon fiber and Alcantara can be everywhere throughout the cabin. All of the typical Jaguar comforts are still present, as well, including 4G Wi-Fi, climate control, LCD displays, and a 380-watt sound system. The dial shifter in the regular XE also gives way to an F-Type-style lever allowing for manual shifting via the lever instead of paddles if you so choose.

There is an additional interior configuration for the XE SV Project 8 that won’t be available in the US and Canada. Called the Track Pack, it completely removes the rear seats, and the front buckets are replaced with carbon fiber units. In place of the rear seats is a roll cage with harness points for fitting the included four-point harnesses. The pack also adds a fire extinguisher system along with a black roof and stripes.

The Jaguar XE SV Project 8 will make its full public debut this week at the Goodwood Festival of Speed. Only 300 of the cars will be built, and all of them will be assembled at the Jaguar SVO facility. Prices start at £149,995, which comes to just over $192,000 at current exchange rates. That price will probably go up with the addition of custom paint and graphics.

Buying a car is a considerable financial decision, and we all want to get what’s best for our family and our finances....
Copyright 2017 CarFilia
Back to top