It’s too early in the investigation of Joshua Brown’s tragic death after his Tesla Model S collided with a semi-truck in Williston, Florida, to determine exactly what role the car’s Autopilot mode played in the crash, though it’s probably not too early to say that the Silicon Valley automaker has set back automated technology by at least a year or two.

The hubris of Tesla’s 45-year-old Boy Wonder, Elon Musk, in touting his company’s ability to quickly add such technology can take the blame for its inappropriate use in his cars. It seems so long ago now, but it was just March last year when Musk announced he would add semi-automated technology features to Tesla’s cars within four months.

Teslas certainly had the hardware already, just as so many conventional luxury cars and some commodity cars already have adaptive cruise control, self-braking, lane-keeping assist, and blind-spot monitoring. It’s just a matter of amping up the software, right?

Right. Except, the others aren’t. General Motors’ Cadillac Division announced its SuperCruise semi-autonomy three years before Musk’s announcement, and the feature initially expected by the end of this year has slipped at least a few months. Volvo, a clear leader in autonomous technology with a goal of zero fatalities in its cars by the next decade, is testing next year with just 100 XC90s in a very controlled environment on 50 kilometers ofhighway in Gothenburg, Sweden. Even fellow Silicon Valley disrupter Google has testedautonomous technology rigorously for more than seven years now, without actually selling anything to the public.

News reports of the Florida crash come just as consulting firm AlixPartners released a study showing that nearly 75 percent of Americans want driverless vehicles, and as BMW, Intel, and Mobileye have announced they intend to bring “highly and fully automated driving into series production by 2021.”

It also comes shortly after Musk’s apparent misstep in announcing Tesla’s plans to buy SolarCity as a way of removing upstream pollution from his cars’ energy source. That forced even Tesla sycophant Adam Jonas, Morgan Stanley’s auto analyst, to downgrade his opinion of the company. The automaker’s reaction to rear-suspension failure problems as reported in the Daily Kanban appears a bit too much like GM’s reaction to Ralph Nader in the mid-1960s. 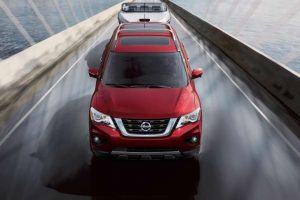 With four model years in the books, the 2017 Nissan Pathfinder was due for a mid-cycle update to keep up with its competition...
Copyright 2017 CarFilia
Back to top