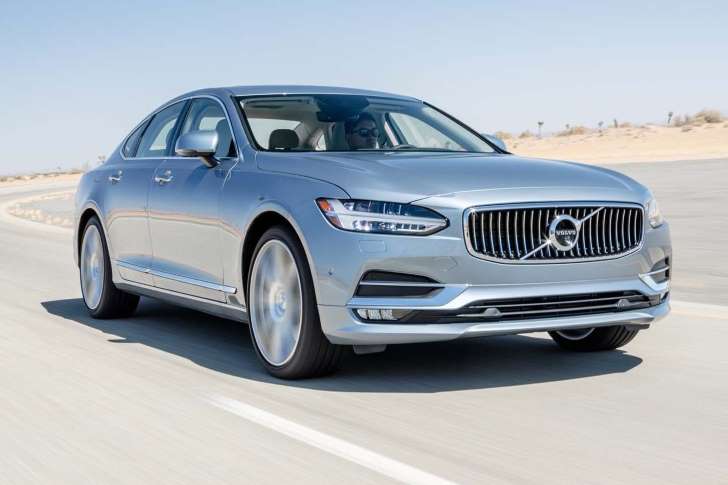 Volvo has been on quite a roll. After the XC90 waited over a decade for a replacement, the second-generation model debuted last year to critical acclaim, driving off with our coveted SUV of the Year award. The Volvo S80’s lifecycle was two years shy of the original XC90’s, but the luxury sedan desperately needed a replacement. With the XC90 redesigned, the Swedish automaker turned its attention to the S80 and, thankfully, some of the XC90’s magic rubbed off on its replacement, the 2017 Volvo S90.

The new Volvo S90 has much in common with the XC90. Built on the same Scalable Product Architecture as the crossover, the S90 actually shares 70 percent of its parts with the XC90, including our S90 T6 AWD Inscription tester’s 2.0-liter supercharged and turbocharged I-4, eight-speed auto and all-wheel-drive system. As with the XC90, the S90 T6’s 2.0-liter supercharged and turbocharged I-4 produces a healthy 316 hp and 295 lb-ft of torque. The T6 engine in our tester is currently only available with all-wheel drive; buyers wanting a front-drive Volvo can opt for the T5, which loses the supercharger and 66 hp.

Despite the sharing of parts between the XC90 and S90, Volvo’s done an exceptional job differentiating the two vehicles, with the S90 sporting its own unique take on the automaker’s design language inside and out. The S90 drives differently too. At the track, our nearly loaded 2017 S90 tester accelerated from 0-60 mph in 5.6 seconds and roared through the quarter-mile in 14.1 seconds at 98.9 mph. The Volvo sedan’s acceleration performance is a second quicker than our XC90 long-termer. The S90 performed exceptionally in the 60-0 mph brake test, coming to a stop in just 107 feet. Unlike most XC90s, which ride on air springs, our S90 tester featured the standard double-wishbone front and transverse-rear leaf spring suspension (rear air springs are a $1,200 option), but skidpad and figure -ight performance didn’t appear to suffer because of it. On the skidpad the S90 averaged 0.88 g, and completed the figure eight in 26.3 seconds, averaging 0.68 g in the process.

Out on the open road, the S90 is quite nice to drive. The supercharged and turbocharged engine emits a satisfying growl as you dip into the throttle and, despite its soda-bottle-sized displacement, it never wants for power around town or on the highway. “Nice, smooth power delivery,” noted Detroit editor Alisa Priddle. “The combination of a supercharger with the turbocharger completely eliminates lag, too.” The S90 handles decently, as well. Although sporty driving is clearly not the S90’s intent (Volvo is saving that for the coming Polestar version), the sedan still drives smaller than it looks with a precise, well-weighted steering rack.

Inside the S90 is a fantastic place to be, with buttery-smooth leather, beautiful texturing and contrast, and fantastic wood trim. It’s readily apparent that Volvo’s interior designer honed his chops working for Bentley. The Volvo’s front seats are comfortable for the long haul, and the backseat offers enough space for adult passengers. Volvo’s Tesla-like Sensus infotainment system is stellar, with crisp graphics and snappy response.

The Volvo S90 T6 AWD starts at $57,245 in the higher Inscription trim, and our tester came in nearly loaded at $66,105. That may not sound impressive, but that’s potentially a value compared to German rivals such as the BMW 5 Series and Mercedes-Benz E-Class. How will the 2017 S90 stack up to the segment stalwarts? Hang tight; you won’t have to wait long to find out.

The Drive’s big-man-on-campus Mike Guy isn’t a big fan of puns, so odds are good he won’t like the name of Henrik Fisker’s...
Copyright 2017 CarFilia
Back to top