Genesis GV80 – Our First Look At The Brand’s First Suv 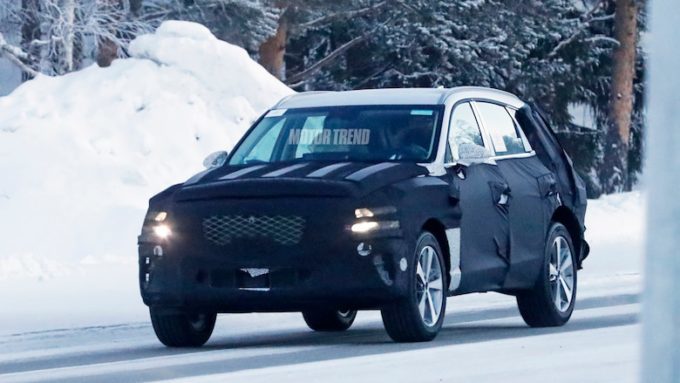 Genesis is in dire need of an SUV to compete in the luxury game. All of its competitors are pumping them out now, but this vehicle you’re looking at here won’t make its debut until 2020. These pictures are important, because it’s our first view of the Korean luxury SUV out testing in its own sheetmetal. Set to be named GV80, this midsize SUV will compete against cars like the BMW X5, Mercedes GLE, and Lincoln Aviator. Yeah, Genesis has its hands full in this segment. If the charming and fun G70 is anything to go by, though, the automaker is on the right track.

The big thing we notice on this one right away is the grille — this diamond mesh design is definitely going to be the new face of Genesis with every new vehicle release. We saw it on the GV80 Concept, on spy shots of the 2020 G80 sedan and now we see it here poking past the camouflage.

Much of the car is heavily covered in vinyl and cladding, but we can decipher its general shape. A long hood reiterates that the engine will most likely be fitted longitudinally to facilitate a rear-drive platform. It’s still unclear whether both all-wheel and rear-wheel drive will offered, but we can be sure most will choose their GV80 with power going to all four wheels. The wheels themselves are 20 inches on this vehicle, though it’s likely we see options for even larger sizes.

Perhaps the biggest mystery of all on this prototype is what’s going on in the back. Genesis places the heaviest camouflage back there, and it kinda resembles a tent. Could they be trying to hide a fastback-shaped rear or just throwing us off? We can see through the mesh to what looks like a rear window placed much further into the car than where the camo stretches. The angle of what’s under the vinyl is difficult to make out, though.

Unfortunately, it’s guaranteed that we won’t be seeing this vehicle debut anytime this year. Last we spoke with Genesis General Manager, Erwin Raphael, he said the GV80 would be coming our way sometime in 2020. 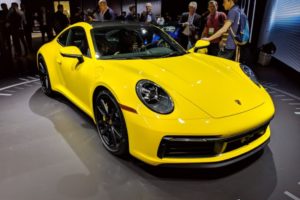 Every new 911 presents a potential existential threat to Porsche purists, and the eighth-generation Porsche 911 is no exception....
Copyright 2017 CarFilia
Back to top